Starting with DR9, we supply a new quantity called noise equivalent area (NEA) in the Tractor catalogs (and downstream products). The NEA measures the scaling between the inverse variance (IVAR) of the flux measurement and the noise level of the sky background. In units of pixels, NEA is defined via:

where IVAR is the flux inverse variance and \(\sigma_{\mathrm{pix}}\) is the per-pixel variance. For a single image, the NEA can be calculated as

where pixel represents the pixel values of the model. See King (1983) for the derivation.

In theory, given the variance map and the NEA values, one can estimate the flux error of a source. One of the use cases of the NEA for the Legacy Surveys will be to model the effects of varying depth and seeing on DESI target selection: given the "truth" photometry from deep imaging, we can estimate the scatter in the photometry from shallower imaging using the NEA and the per-pixel depth. The NEA can also be used to correct for offsets in the photometry due to sky-subtraction residuals.

The utility of the NEA for predicting flux errors relies on several assumptions:

The actual computation of the NEA is complicated by two considerations.

The first complication is that Tractor uses multiple overlapping images that have different depth and PSF, whereas the NEA definition in Eq. 2 only works for a single image. Therefore we instead compute an effective NEA, which is a weighted average of the per-image NEA:

The inverse variance (of the flux measurement of a source) from multiple images is, by definition (see Eq. 1):

and, is also the sum of the per-image inverse variance:

In the legacypipe software used to process the Legacy Surveys imaging, the effective (combined) pixel-level variance \(\sigma_\mathrm{pix,eff}\) is given by:

Combining all three of the preceding equations produces Eq. 3.

The second complication is that some sources are only partially covered by an image (CCD), and some sources (models) have wings that extend beyond their blobs. Since this breaks the assumption of a constant pixel-level variance, there is no single rigorous method to compute the NEA. We therefore decided to provide two versions of the NEA in the Tractor catalogs:

The nea version of the NEA calculation is:

The blob-masked version of the NEA calculation is:

where \(\mathrm{flux}\) is the total flux of the model (regardless of coverage), and \(\mathrm{maskedp}\) is the blob-masked model image patch. The blob mask is accounted for in this version of the NEA calculation, and, hence, the blobnea value increases with decreasing coverage. Effectively, for blobnea, images with less coverage have larger noise for the same pixel-level variance.

The two versions of NEA agree within 1% (10%) for 90% (97%) of all sources. The nea version might be more appropriate when correcting for residual sky background. The blobnea version should be more accurate for predicting the flux errors via:

The plot below shows a comparison between flux_ivar_g from tractor and the predicted flux_ivar_g using blobnea. At bright magnitudes, the NEA overestimates flux_ivar because the sources are bright compared to the sky (although the deviation can be easily corrected for point sources). The agreement is better than a few percent for faint sources. 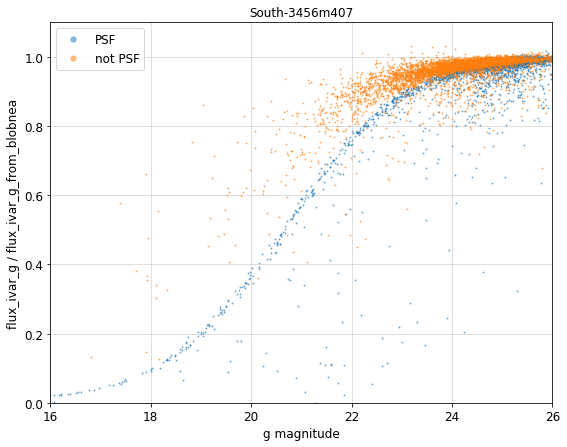 The code used to calculate NEA for the Legacy Surveys is: