The Legacy Surveys are producing an inference model of the 14,000 square degrees of extragalactic sky visible from the northern hemisphere in three optical bands (\(g,r,z\)) and four infrared bands. The sky coverage is approximately bounded by -18° < δ < +84° in celestial coordinates and \(|b|\) > 18° in Galactic coordinates. To achieve this goal, the Legacy Surveys are conducting 3 imaging projects on different telescopes, described in more depth at the following links:

Images from DECaLS \(g,r,z\)-band observations (survey program 0404; https://legacy.noirlab.edu/perl/abstract?2014B-0404) are included from 12th August 2013 through 18th March 2018. DR7 also includes DECam data from a range of non-DECaLS surveys, including observations that were conducted from August 2013 to March 2018.

The table below indicates the area covered in DR7 for different numbers of passes and in different filters. These are precise area estimates derived from the geometry of CCDs that contribute to the Legacy Surveys footprint.

DR7 includes the stacked images and the Tractor-based catalogs. The size of the DR7 data distribution is:

*Note that although the contents of a directory should be fixed for each Data Release, the size of a directory can change. This is typically due to updated file compression. So, the listed directory sizes should be viewed as (very reasonable) estimates.

For all of the Legacy Surveys, including DECaLS, co-added images and Tractor catalogs are presented in "bricks" of approximate size 0.25° × 0.25°. Each brick is defined in terms of a box in RA,Dec coordinates. For the image stacks, we use a simple tangent-plane (WCS TAN) projection around the brick center. The projections for the \(g,r,z\) filters are identical. There are 662,174 bricks spread over the sky, meaning that each brick has an average area of 0.0623 deg2. The brick images have some overlap. The co-added images should be used with caution, as noted below in the Image Stacks section.

There are approximately 835 million unique sources in DR7 spread over 180,102 bricks.

Images, for all 3 of the Legacy Surveys can be viewed directly using the Sky viewer and raw data can be obtained through the NOIRLab portal (see also the information near the bottom of the files page).

Sections of DECaLS for DR7 can be obtained as JPEGs or FITS files using the cutout service, as follows:

It is possible to retrieve multiple cutouts from the command line using standard utilites such as wget.

The maximum size for cutouts (in number of pixels) is currently 512. Pixscale=0.262 will return (approximately) the native pixels used by the Tractor. For information on how to recover BASS and MzLS cutouts, see the DR6 description page.

See also the list of URL/cutout patterns that are supported by the viewer.

The source detection uses a PSF- and SED-matched-filter detection on the stacked images, with a 6σ detection limit. The Tractor fitting step is initialized with these positions, although these positions can be changed during the fits and low-S/N sources can be removed.

For source detection, each image is convolved by its PSF model, then a weighted stack of these is created in order to optimize the point-source detection efficiency. Next, SED-matched combinations of the three bands are created, for two SEDs: "flat" (a source with AB color zero), and "red", a source with AB color \(g-r = 1\), \(r-z = 1\). Sources above 6σ are detected in each of these two SED-matched filters, as well as in each band independently.

The locations of the peak fluxes of extracted sources are used to determine where objects are photometered and how the initial parameters for an object are seeded. When a source is detected in multiple bands a choice of filter must be made to seed the initial extraction. Sources detected in other bands beyond the initial filter are only kept if they are sufficiently separated from an object that was extracted in previous bands. In DR4, DR3 and earlier data releases, source detection was run first in \(g\), then in \(r\), \(z\), "flat" and finally in "red". In DR5, DR6 and DR7, source detection was run first in \(z\), then in \(r\), \(g\), "flat" and finally in "red". \(z\) was chosen as the "primary" detection image to take advantage of the better PSF in that band.

Starting with DR7, Gaia stars are extracted as independent sources. Stars from Tycho-2 and Gaia Data Release 2 are matched, and their Gaia information is retained. Such stars are then fixed at their Gaia positions shifted by their proper motions in order to determine their positions at the epoch of their Legacy Surveys image. Gaia stars are forced to remain stars (galaxy models are never considered as an option for such sources) but their fluxes are extracted from the Legacy Surveys images. Tycho-2 stars have brightstarinblob set (see the catalogs page) and all other sources that share a blob with the star are fit as point sources. The reasoning behind this choice is that Tycho-2 stars, at 12th magnitude and brighter, have large halos that are not include in our model choices and are best fit by misleading (and computationally expensive) diffuse galaxy models.

The configuration files for SExtractor and PSFEx that we used for a given iteration of our codebase are available on our github page.

The Community Pipeline removes a sky level that includes a sky pattern, an illumination correction, and a single scaled fringe pattern. These steps are described on the NOIRLab Community Pipeline page. This makes the sky level in the processed images near zero, and removes most pattern artifacts. A constant sky level is then added back to the image that is the mean of what was removed.

Additionally, we compute and remove a spatially varying (spline) sky model, by detecting and masking sources, then computing medians in sliding 512-pixel boxes. The stacked images have this sky level removed.

The Tractor code runs within the geometrical region of a brick. This fitting is performed on the individual exposures that overlap the brick, without making use of the image stacks. This preserves the full information content of the data set in the fits, handles masked pixels without the need for uncertain interpolation techniques, and fits to data points without the complication of pixel covariances.

The decision to retain an object in the catalog and to re-classify it using models more complicated than a point source is made using the penalized changes to χ² in the image after subtracting the models for other sources. The "PSF" and "REX" models are computed for every source and the better of these two is used when deciding whether to keep the source. A source is retained if its penalized χ² is improved by 25; this corresponds to a χ² difference of 27 (because of the penalty of 2 for the source centroid). Sources below this threshold are removed.

The source is classified as the better of "point source (PSF)" or "round exponential galaxy (REX)" unless the penalized χ² is improved by 9 (i.e., approximately a 3σ improvement) by treating it as a deVaucouleurs or exponential profile. The classification is a composite of deVaucouleurs + exponential if it is both a better fit to a single profile over the point source, and the composite improves the penalized χ² by another 9. These choices implicitly mean that any extended source classifications have to be at least 5.8σ detections and that composite profiles must be at least 6.5σ detections.

The fluxes are not constrained to be positive-valued. This allows the fitting of very low signal-to-noise sources without introducing biases at the faint end. It also allows the stacking of fluxes at the catalog level.

The galaxy profiles (the exponential and deVaucouleurs profiles mentioned above under Morphological Classification) are approximated with mixture-of-gaussian (MoG) models and are convolved by the pixelized PSF models using a new Fourier-space method (Lang, in prep). The galaxy profile approximation introduces errors in these models typically at the level of \(10^{-4}\) or smaller. The PSF models are treated as pixel-convolved quantities, and are evaluated at the integral pixel coordinates without integrating any functions over the pixels.

The Tractor algorithm could be run with both the source parameters and the calibration parameters allowed to float, at the cost of more compute time and the necessity to use much larger blobs because of the non-locality of the calibrations. A more practical approach would be to iterate between fitting source parameters in brick space, and fitting calibration parameters in exposure space. Such iterations will be considered and tested for future data releases. Another practical issue is that the current PSF models may allow too much freedom.

The flux calibration for DECaLS is on the AB natural system of the DECam instrument. An AB system reports the same flux in any band for a source whose spectrum is constant in units of erg/cm²/Hz. A source with a spectrum of \(f = 10^{-(48.6+22.5)/2.5}\) erg/cm²/Hz would be reported to have an integrated flux of 1 nanomaggie in any filter. The natural system means that we have not applied color terms to any of the photometry, but report fluxes as observed in the DECam filters.

Note that these zero points have been updated since DR5.

The brightnesses of objects are all stored as linear fluxes in units of nanomaggies. The conversion from linear fluxes to magnitudes is \(m = 22.5 - 2.5 \log_{10}(\mathrm{flux})\). These linear fluxes are well-defined even at the faint end, and the errors on the linear fluxes should be very close to a normal distribution. The fluxes can be negative for faint objects, and indeed we expect many such cases for the faintest objects.

The filter curves are available for DECaLS g-band, DECaLS r-band and DECaLS z-band.

Starting with DR6, PSF photometry uses the same PSF models (and sky background subtraction) for zeropoint-fitting as is later used in cataloging. This was not the case for DR5 or before. So, for DR7, the measured fluxes for PS1 stars should be completely self-consistent.

Aaron Meisner has carefully studied the stability of the WISE instrument. He finds that there is small, but measurable, change to the instrument with time. Most noticeably, the PSF has broadened by 1.1% (0.9%) in W1 (W2) in the NEO4 full-depth coadds used for DR7 relative to the NEO2 full-depth coadds used for DR4 and DR5. These values are reasonably consistent with a finding from Aaron that the W1/W2 full-depth fluxes from DR7 are roughly 8-12 mmag fainter than in DR5 (Meisner, priv. comm. decam-chatter list 7423). Note that any broadening will be accounted for in the Tractor PSF, and internal systematics are stable at the 0.1% level.

The most recent values of the Galactic extinction coefficients are available on the DR8 catalogs page.

DR7 astrometry is tied to Gaia, but in a (very slightly) inconsistent fashion. Each image is calibrated to Gaia Data Release 1, yielding an astrometric solution that is offset by the average difference between the position of Gaia stars at an epoch of 2015.0 and the epoch of the DR7 image. Source extraction is then fixed to the Gaia Data Release 2 system, such that positions of sources are tied to predicted Gaia positions at the epoch of the corresponding Legacy Survey observation. Despite these inconsistencies, astrometric residuals are typically smaller than ±0.03″.

Starting with DR6, PSF photometry uses the same PSF models (and sky background subtraction) for zero-point-fitting as is later used in cataloging. This was not the case for DR5 or before.

The image stacks are provided for convenience, but were not used in the Tractor fits. These images overlap adjacent images by approximately 130 pixels in each direction. These are tangent projections centered at each brick center, North up, with dimensions of 3600 × 3600 and a scale of 0.262″/pix. The image stacks are computed using Lanczos-3 interpolation. These stacks have not been designed for "precision" work.

The histograms below depict the median 5σ (AB) depths for galaxies in areas with different numbers of observations in DR7. 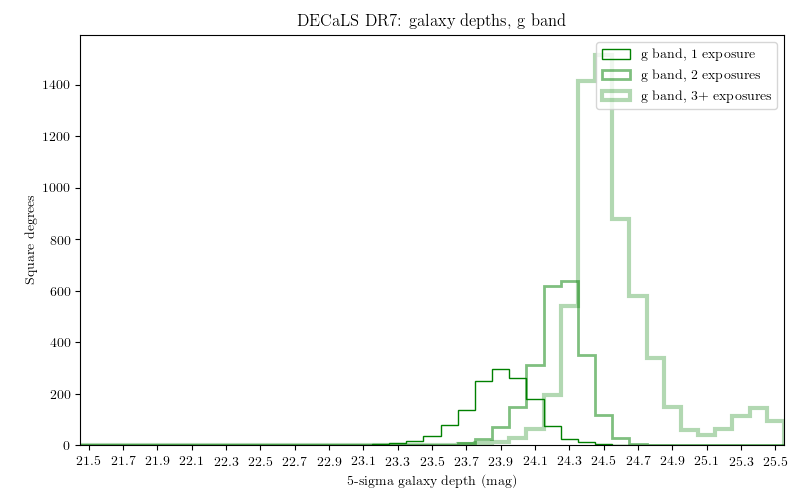 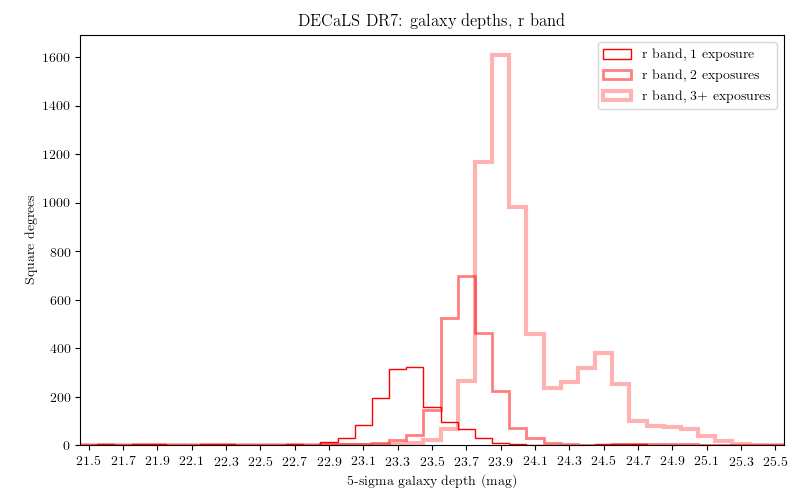 These are based upon the formal errors in the Tractor catalogs for point sources; those errors need further confirmation. These can be compared to the predicted proposed depths for 2 observations at 1.5″ seeing of \(g=24.7\), \(r=23.9\), \(z=23.0\).

Continguous region of pixels above a detection threshold and neighboring pixels; Tractor is optimized within blobs.

A region bounded by lines of constant RA and DEC; reductions are performed within bricks of size approximately 0.25° × 0.25°.